15-17 May 2019, the Institute of Network Cultures, ArtEZ University of the Arts and Willem de Kooning Academy organized Urgent Publishing, a 3-day event with discussions, explorations and experiments about publishing strategies in post-truth times.

While digital publishing technologies have helped bring different voices onto the stage, they also instigated the ‘post-truth’ era, leaving a disenchanted public behind to scavenge the rubble of breaking fake news stories, information pollution and broken links.

How can designers, developers, artists, writers and publishers intervene in the public debate and counter misinformation in a meaningful and relevant way? What are new publishing strategies for our current media landscape? How to design for urgency without succumbing to an accelerated hype cycle?
SESSION 1: THE CARRIER BAG THEORY OF NON-FICTION

Post-digital Publishing and the Return of Locality by Axel Andersson.

Place, site, and locality have returned to the public discourse with a vengeance. Both in paternalistic invocations of national paradigms such as Brexit and in a retreat to salon-cultures in the face of the digital revolution. Locality is also a potentially important concept in post-digital publishing strategies that operate beyond the digital/analogue divide. One challenge is to find meaningful and critical ways of re-territorializing digital publishing practices.

Swedish Kritiklabbet has carried out a number of experiments to investigate the role of locality for contemporary publishing. Under the working title ‘mass-criticism’ we tried to combine locality and public participation with editorial reflection and intervention. One experiment related to the Gothenburg Book Fair of 2016, where a digital montage/fragment work was constructed by a team in Stockholm with solicited texts from participants at the fair in Gothenburg. This experiment contributed to the conceptualization of another experiment at the Supermarket Art Fair in Stockholm 2018. For this event Kritiklabbet moved its editorial team to the Supermarket site and contributed as one ‘exhibitor’. The exhibition consisted of a production and distribution site of a physical newspaper, The Last Mass Mail, that was made with critical interventions submitted by visitors to the art fair. 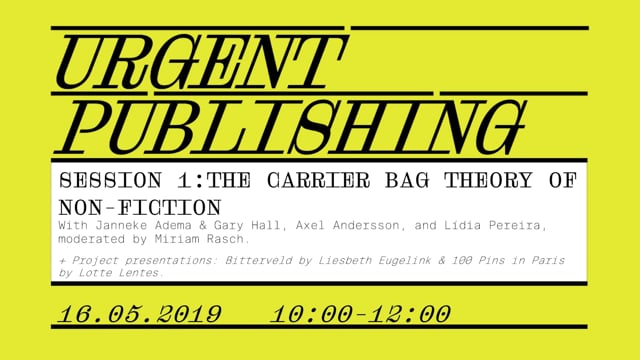