15-17 May 2019, the Institute of Network Cultures, ArtEZ University of the Arts and Willem de Kooning Academy organized Urgent Publishing, a 3-day event with discussions, explorations and experiments about publishing strategies in post-truth times.

While digital publishing technologies have helped bring different voices onto the stage, they also instigated the ‘post-truth’ era, leaving a disenchanted public behind to scavenge the rubble of breaking fake news stories, information pollution and broken links.

How can designers, developers, artists, writers and publishers intervene in the public debate and counter misinformation in a meaningful and relevant way? What are new publishing strategies for our current media landscape? How to design for urgency without succumbing to an accelerated hype cycle?

While mainstream media and academia are still debating the importance of internet memes for contemporary communication, fringe groups on social platforms have been actively using them to reframe public discourse and influence elections. While most critics have been careful about overstating the importance of memes, some scholars have attempted to interpret memes as the emergence of a powerful language, capable of creating, subverting, and destroying symbols, narratives, and mythologies.

In order to assess the real impact of memes, extensive quantitative investigation seems crucial. Platform capitalism thrives on the extraction of value from data – the exact same data that researchers would desperately need in order to perform the aforementioned investigations. But this data, for the most part, is not accessible to researchers. Facebook seems particularly unwilling to cooperate with independent scholars, using the post-Cambridge Analytica sensibility for privacy and data as a pretext to deny access to its API.

Clusterduck is an interdisciplinary collective investigating digital subcultures and online communities. With their project #MEMEPROPAGANDA they focused on the growing political and social impact of memes. To conclude the research started with #MEMEPROPAGANDA, Clusterduck will focus on the role of social platforms for the creation, spreading and reception of memes, with an eye on the role of the most engaged online communities. 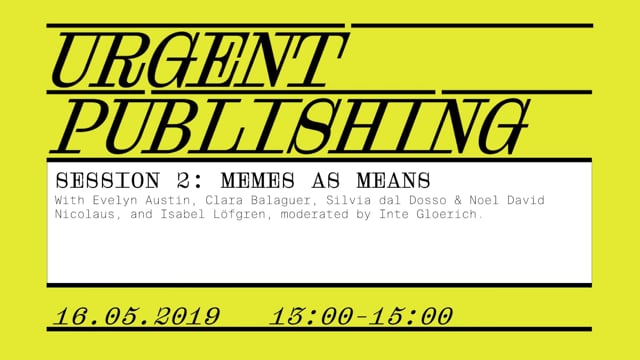